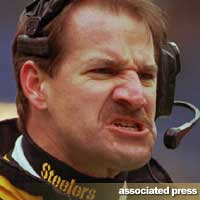 I just realized that I am going to be busy. More busy than ever. My next chunk of open time is in July. I guess I cam bragging. It would be stupid to complain about work in my line of business. Marshall Tucker, Shawn Mullins, & studio records are on the menu.
Gareth Asher had a very productive night in the studio. I wasn't home until 5:45am.
I need to get busy on the Nicholas Alan charts for his session on Tuesday. I need to buy another Calligraphy pen.
Also, today, the Pittsburgh Steelers head coach of 15 years resigned. Out of all the coaches in the NFL, I would pick him to get in a fox hole with. I'd even pick him even if he had a broken arm. He's a man's man. I wish him well.
Posted by Clay Cook at 22:16