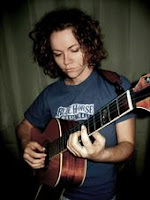 I spent most of the day running errands. I dropped Chris Hicks amp off at Bakos Amp Works on Ponce. It needed some serious TLC. I took a mic to Music Go Round & sold it. It was probably the 15th best mic in my collection. It's purpose was served better as cash. I actually hated it. I won't trash the name of the mic... but it was made in Baltic Latvia. I then paid a visit to Gerry Hansen's Creekside Station Recording. Shawn Mullins was finishing up his tracking there. I had to drop off a few things. I then traded my Fender '59 Bassman 4x10 RI for a Two Rock 2x12 - for use with a head to be named later. I also bought some new heads for my kit at the studio. It's been a few years since it has been reheaded.
I had dinner with Michelle at Mellow Mushroom. Then went back to the studio to meet Emily Kate Boyd. She was a little late so I restrung my Nash Tele. Emily Kate Boyd, or EKB, will be making a record with me next month. We took tonight to talk about the direction of the record & feel each other out for ideas. I'm really excited about this record. No offense to her previous work, but she's finally writing songs that match her wonderful voice. She's coming into her own as an artist.
After she left, I experimented withmy 65 Amps London. I'm excited about using that amp for a while. The stage volume has dropped a little for us... so the 18 watt monster is ready to play.
I came home and 'built' a pedal board for the road. Then I watched the final episode of ESPN's The Bronx is Burning. Well done. A pleasant distraction this summer. Can't wait for the DVD.
Posted by Clay Cook at 00:53