Wiltsey, day two (among other things) 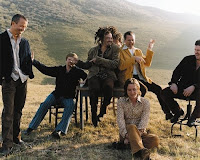 I got up bright & early (gimme a break, 8am is early for musician). I was in the studio by 9:15am mixing Brian Wiltsey's tune that we recorded on Monday. It was done before lunch time. I then - had lunch - at Doc Green's again. Nick Niespodziani met me at the studio to borrow a guitar from me & play me some of the new Y-O-U record that he is working on. I'm excited. It sounds really cool.
I made non-vox mixes for 4 of Jesse Ruben's songs. His manager needed them to pitch to TV shows. Typical.
I also started recording a new version of one of my tunes for the record. I've been pondering over this song called "Validation." It's a good song, but I don't think that the version that I initially recorded goes with the rest of the record. So I have started rerecording it to be more like the others. It went pretty well (so far).
Michelle & I had dinner at Little Azio's on Moreland & we went to Target to pick up a couple things. We also bought our 'sunburst' for our house (our Grant Park sunburst). You'd get it if you lived here.
I also learned all of Adrianne's tunes for Saturday night. I may brush over them again before I go to bed. I felt very good about today's productivity rating.
Listening: Counting Crows new album 'Saturday Night & Sunday Mornings' - I highly suggest it - one of two of the best major label albums of the year (the other being Sheryl Crow's 'Detours') - I guess it has something to do with the Crow thing - Are the Black Crowes releasing an album this year?
Posted by Clay Cook at 21:54