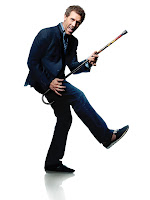 ...nothing. We pulled into Spartanburg, SC at 1pm. I checked into my room &, honestly, I don't know where the day went. I did some clerical work (as clerical as I get). I took a walk to the CVS down the street.I also did two loads of laundry. Outside of that, I guess I just watched television & brought my vitality back up to normal levels. I've been eating a lot of foods loaded with sodium lately. I guess that I'm craving that stuff right now for some reason. I think I'll lay off for a couple of days. Fruits, here I come.
Tonight's episode of 'House, M.D.' was great. It was very different from the usual plot lines. This whole season, which for me started off at a crawl, has finally proven itself to be one hell of a ride. It's all one big picture instead of 24 separate stories that hardly intermingle. The first season had some good continuity to it, but since then it's been a lot of instant gratification as far as story lines (sans the little 5-6 episode bout with the cop last season).
Oh yeah... & possibly the funniest thing that I've seen this year:
http://www.funnyordie.com/videos/611387370c
Posted by Clay Cook at 22:17