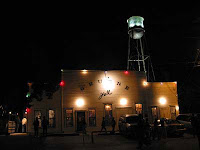 I got up & was on the road by 10am. It was a painless trip. It's hot in Texas.
They make your checks here! A lot of check printing companies are here in New Braunfels, TX. That certainly doesn't make it any cooler here (literally).
We played Gruene Music Hall (pronounced "green"). Lots of Krauts settled here I imagine. Clay McClinton opened up (Delbert's son). We played another two & a half hour barn burner tonight. It was hot. The club was originally a chicken coup. It still doesn't have central air. They have fans though. It is the oldest 'dance hall' in Texas. They can keep their history - I just want a shower.
Posted by Clay Cook at 23:23