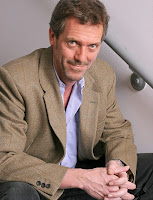 I slept in today. Not much to report. I went to see the progress that Dwight Maddox made on my new guitar. I brought him my '54 Esquire to make a cast of the neck. That guitar is going to be really, really cool.
MIchelle & I spent most of the day together. Errands are a big part of our time together as of late. Bruce Hornsby said it best: that's just the way it is, some things never change.
The big news of the day was the Christmas party tonight at a neighbor's house. I stayed for 3 hours. Michelle stayed an extra 2 after I left.
I caught Hugh Laurie on Saturday Night Live. It may not have had the most gut busting skits... but I noticed that the current cast of SNL are fantastic actors. Instead of comedians these are real actors. It was actually quite impressive & only heightened by the addition of Hugh Laurie for the evening.
Anyway, if it comes on again - I highly suggest watching this rerun.
Posted by Clay Cook at 23:02