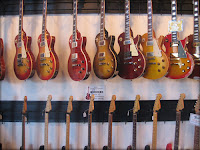 We had an early bus call. Michelle dropped me off before 7:30am & made her way back home. We had a great time passing each other over the past 2 weeks.
The guys loaded in at 8am at GAC (Great American Country). We had a 10am make up call. We started taping by 11am. We played "Chicken Fried" & "Whatever It Is" for an internet exclusive. It was another acoustic version. I dug it though. It looked really good with all of the cool camera stuff they were doing.
Then we did 3 separate interviews/teasers for GAC.
After that, Zac went to CMT for a quick interview while we took the bus back to the hotel. Some of us went to frequent some of the Broadway stores this afternoon. I bought a couple of t-shirts from Gruhn's Guitars. Then we went to Nashville Cowboy in 2nd Ave. I found a really cool Scully dress shirt. It was the last one so it was on sale.
We had dinner at El Rey. Other than that, I've been chilin' on the bus. Probably be passed out soon.
Posted by Clay Cook at 21:20