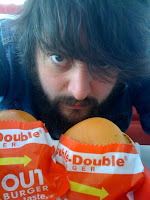 So here we are again. I got my shower, my In-N-Out Burger, & we had to leave by noon. We visited our management company, ROAR. It was interesting to see what goes on behind the scenes. They're really working some crazy angles.
Shortly after that, we visited The Recording Academy here in L.A. (i.e., NARAS). It was good to get the rest of the band signed up for NARAS so they'll be eligible to vote in this year's Grammy Awards.
We the visited Monarchy's clothing warehouse. They're a designer clothing label. It's not really my bag, but I do appreciate everything they bestowed upon us.
I'm ready to do Leno tomorrow. Then ready to head to Hawaii. Then ready to go home.
Posted by Clay Cook at 00:22

Hey,
I've kept this blog up for over 2 years now. I've become kinda slack lately though. The reason being is that I've had less 'computer' time in my new road gig with ZBB. I can't seem to find the time during the day to plug it up, turn it on, & log on. Another reason is that I've been doing a great deal of my computer work (e-mail, internetting, etc.) on my iPhone this year. It's just been hard to get into the groove.
THat being said, since I blogged last, I'm feeling much better. We played Boulder Station in Vegas, Stagecoach in Indio, & tonight we played Rodeo Club in San Jose. The other two gig were normal, club-type gigs. Stagecoach was a huge country music festival. We played, then Lady Antebellum, Miranda Lambert, Kid Rock, & Kenny Chesney. We played to over 40,000 people that day. The more interesting things happened later that night.
I watched Kenny Chesney play for half an hour. It was quite impressive. The light show, LED back drop was amazing. It's on par with, say, U2 or something like that. He carries 17 semis around with him to carry all of the stage setup. I was impressed.
The evening concluded with hanging out with Kid Rock playing songs on a couple guitars. What can I say... I like him.
Going to try to make a better effort or find a new system for blogging...
Posted by Clay Cook at 23:54 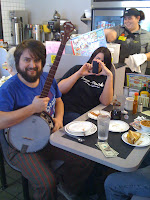 I know... it's been another "long time."
A lot has happened that has kept me from my computer.
1. Michelle came out on the road with us. I thought I'd spend more time with her instead of my Mac.
2. I developed some serious stomach aliment. I had diarrhea (saying it like that is an understatement) from the morning on my birthday until yesterday afternoon (4 solid days). I went to the hospital & everything. Weak!

I'm happy to report that I'm on the road to a full recovery. I only missed 3 songs over 4 days. Just couldn't do it all.
Anyway, I'll get back on the horse & keep you updated the best I can.
Trying,
Clay
PS. Here's a pic from my birthday; a Waffle House in Biooxi, MS. The band bought me a banjo. How cool is that?
Posted by Clay Cook at 21:14

Okay. So I've been very bad with keeping up with my blog as of late. Here's why:
The day after my last entry we went to Denver, CO. We had a day off there & played a show the following day. I was sick as a dog. Then there was Santa Fe, NM; great gig, awesome town - still sick. I started coming around the following day in Los Angeles, CA. We had a great gig, again, but there was a lot going on. We had management, friends, family, etc. to worry about.
Then came the madness known only as Las Vegas (a.k.a. The ACM Awards). We won Best New Group or Duo. We lost Best New Artist to Julianne Hough - a loss that can only be explained by a popularity contest as opposed to quality or merit or even future prospects. This reminds me of something that John Mayer told me a day after he lost the Grammy® for Best New Artist to Norah Jones: "good for her... it's not like she'll be able to repeat this success." The irony is that Norah has won 4 more Grammys® since his comment to me. Sure, John has won six himself since the comment, but I understood what he meant. He was just wrong... which is okay. I would like to enforce his statement about Norah on Julianne Hough. I don't she has a chance for a 'serious' future in music outside of the lip-gloss, pop style that she has been slinging. I guess this may come off as a foolish statement but I'm a big fan of calling your shot. At least I'm not just sitting back & letting life happen in front of me. I enjoy having the ability to criticize the world as I see fit. That it one of my favorite parts about being American. No matter how bad the economy gets... I can still say whatever I want. The funny part to me is that I just compared Norah Jones to Julianne Hough - if you are a critic or some one who knows the industry feel free to laugh out loud.
Anyway, we played one more gig in Augusta on this past Tuesday. The line up was Shawn Mullins, Zac Brown Band, & Hottie & The Blowfish. I double dipped that day. It was really windy & cold too. I've been in Minneapolis & Denver in the last month & Augusta, GA in April was colder. I guarantee it!
I've spent the past 2 days in Savannah, GA on vacation with my wife. It's been fantastic. Savannah in the springtime is utterly charming. I highly recommend it. See you in Spartanburg next Thursday.
Posted by Clay Cook at 23:14