Getting It All Together

So. I've been home for a few days. Every day has been filled with tiny errands. Tuesday, I dropped off my bag & guitars with the convoy of buses that left the Atlanta area. I had planned to ride all the way to San Diego with them. I'm not above it. However, I have a lot on my plate regarding recordings right now.
Not only are we knee deep in the Zac Brown Band record, but we're still not finished with Sonia, Nic, & Levi's records. I also am 40% done with Coy Bowles' new album. I spent last night backing up Sonia, Nic, & Levi's albums onto one drive (which will accompany me to San Diego). We will finish those out on the road.
Coy's album resumes tonight. We have a lot to do but it's not overwhelming. Soooo... a more consistent update schedule starting on Saturday.
Here I go...!
Posted by Clay Cook at 11:33 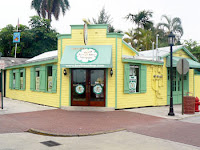 This is day two of background vocals here at Shrimpboat Sound. It's Jimmy Buffett's studio. It's a pretty bad-ass place. You walk out the front door & if you walk 10 feet - you're in the water. Zac's almost done himself. He has 14 in the can & 3 more to do. He's been here since Tuesday though. Jimmy, Hop, & I have been here since yesterday morning. We've done most of the tunes that we know. Starting tomorrow - we have to start creating (instead of singing something that we've sung for over a year).
Work, work, work.
Anyway, Michelle & I went to Hawai'i last week. Of course it was awesome! Can't wait til we go back.

Ahh... yes. I edited this blog after the fact. I wrote it at 7pm & came back at the end of the day.
We left the studio around 7:30pm for dinner. Rusty (our chef) cooked an amazing meal for us at Jimmy Buffett's place. Jimmy left two days ago but Zac is staying at his house. The rest of us are slumming it at the Westin (giggle).
The real reason why I amended this post was to report that after dinner I wrote 4 songs. I know that looks like a typo... but it's true. I had the ideas & some melodies kickin' around... but I sat down & just fucking did it. That's the key. Nothing to do helps a lot. No options too. I need to make that happen more often.
Also, we ate some key lime pie today topped with blueberries from a place across the street from the studio called Kermits. If you're ever in Key West... GO THERE & GET WHATEVER PIE IS FRESH!
Posted by Clay Cook at 23:54 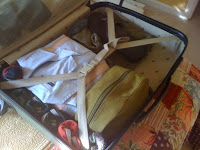 Okay... so I've been a bit tardy on this whole blog thing again. Well I'm gonna be real tardy for the next week. Michelle & I are going to Hawaii (Kuaui to be exact) tomorrow morning. Don't bother, burglars, some one's watching the dogs & the house. We're going for our 10 year Anniversary. Yeah, yeah, yeah... it's our 2 year marriage anniversary, but our first date was on Feb 14, 2000. Holy crap!
Sooooo... to recap. We won a Grammy. Played on the Grammys. Flew home. Worked a couple of nights in the studio. Caught a cold. Took the dogs to the vet. Played a show, sang the anthem, rode in the pace car just before the first lap, & played on national TV at the BUd Shootout in Daytona. We also played a 75 minute set earlier that day at Sea World in Orlando (no shit - it happened). Watched the Super Bowl (great game). I took one of the dogs back to the vet (don't worry, he's fine). Did some more studio work & packed my bag (above is the picture of my side of the bag - I don't need much).
We leave in the morning as the sun is getting up & will land after the sun has set - in a time zone that's 5 hours away. Long trip but worth every second. Ready for the experience. This is our 3rd time to the same place. Sometimes I think we should find another place to go to - but it's sooooo amazing, that I don't WANT to go anywhere else.
Anyway, see you next week.
Posted by Clay Cook at 19:10

I can't believe it. ZBB won the Grammy for Best New Artist at the 2010 Grammys. We are very lucky as an organization. Our performance tonight was sooo much fun. I was really proud of it. It was cool to have a vocal solo in front of the world... even though they didn't put a camera on me or light me up during it. Wrong beard I guess.
Anyway, 2010 should be out of control. The start of the new record, the big dates this year, & now this. Here we go. I didn't think we could top '09.

[Posted with my iPhone!]