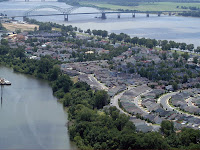 For some strange reason I was up at 7am. I was in the front seat as the bus pulled into the venue. Mud Island has been here forever & it's an original. They sunk a giant freighter in the middle of the Mississippi River & sediment built up around it. So they built an island on that. & built a venue on that. It was kinda tiny. The crowd was great. We held the show for over an hour waiting on the lightning & the rain to let up. Supposedly there was another system moving in a little over an hour after this one passed. So we were prepared to play an hour set & 'get out of Dodge.' Fortunately, the system went north of us all together. We played a good 2 hour+ set. Since Zac was winging the setlist after 45 minutes, we played some cool, unusual stuff. My favorite audible of the night was "Lonesome"... a Shawn Mullins song. I started on pedal steel but moved over to Hammond organ shortly before the first chorus. Lotsa fun.
Anyway, it could've been MUCH worse tonight. 3 more shows... so I'd better pace myself.
Posted by Clay Cook at 00:35