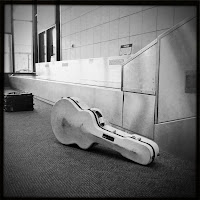 It's much too early to feel winded. If this was a marathon, I'd be at mile 3. This morning was great. I had a nice big breakfast & an easy trek to the Portland Airport. The only part of the day that sucked was the almost 4 hour lay over at LaGuardia. The airport was fine but the waiting sucked. I landed at the Pittsburgh airport a little after 3pm & the drive was short to the gig. Once I got there, I didn't have much to do until showtime. I rested in my OWN bunk. It's my home away from home... & since I'm away from home - it was very much like home.
We had a tiny meet & greet around 7:45pm & then had a short vocal warm up. The show kicked off at 9:15pm. It was so refreshing & slightly challenging. We were playing a show put on by the local country radio station to thank the troops. It was all acoustic. I played my Martin all night except for one song - in which I played mandolin. Hop switched between electric bass & upright bass. Zac, of course, played his Taylor classical. That was it: a broken down, acoustic, mini-Zac Brown Band. I had a blast trying to cover no just my parts, but Coy's & Jimmy's. Also, I had to sing Jimmy's part all night so my head was on swivel. Very refreshing to play shows like that from time to time.
I'm back at the Pitt airport about to crash & have another day of travel & playing tomorrow. I love my job.
Posted by Clay Cook at 23:24