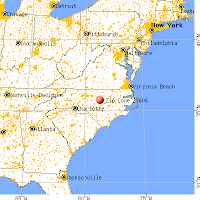 We got out of the hotel as soon as we could this morning. I didn't sleep well. The solid part of my sleep was between 1:30am & 5am. The rest of the time was on the "wake up every hour" rig. I'm definitely sick. I have no other symptoms other than my fever. I guess my body's trying to get rid of something. Ibuprofen, water, & as much rest as this schedule will allow should take care of it.
Our drive was rather pleasant. Glad we didn't have any suspect weather to drive through. We had lunch at Buffalo Wild Wings in Greensboro on the way to Raleigh. It was welcomed.
Upon entering Raleigh, I noticed a tiny guitar shop on the left side of the street. I pointed it out to Levi & he pulled over. We had a few hours to kill... so why not. As we made our way from the parking lot behind the building to the front door I commented that "there was no way this shop is going to have anything good." Well, I was wrong. Damn near everything in there was good... they didn't have much, but everything was good. It's called Guru Guitars.
Anyway, our load-in was painless. As was soundcheck. We checked in the hotel & by the time it was time to leave for the gig, I was mayor of feverville... achy ass feverville. However, it was musically the best show of the tour so far. I thought I was going to have trouble singing but I didn't. Had my best night so far. Also, the opener was BJ Barham. He's the lead singer of the band American Aquarium. He was AWESOME. He's working on his solo album & it should be out in a few months. I'm definitely getting one.
I am back in the hotel room & both of us are toast. I'm a little more burnt on both sides though. Half way done - 4 of 8 finished. This is a great tour/lineup.
Posted by Clay Cook at 23:49