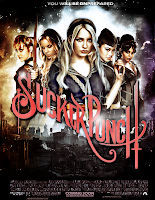 Last weekend was pretty sudden, stressful, & exciting. It was good to test in the water really quick to before you swim across the channel. While the crew set sail for Winston-Salem tonight, the band has another week off - technically 10 days since the last show. I have spent my time putting the final touches on Coy's record, learning a new classical guitar piece, & taking care of my body (finally). That's really all I've got. I'm enjoying it though.
I've been working on Isaac Albinez's "Asturias (Leyenda)" for the past week. It's very demanding but rather gratifying. It's been a while since I sharpened my classical chops. Like, 12 years ago.
On a whim, I went to see the late showing of "Sucker Punch" tonight. I would assume that most folks won't enjoy this. I'm a big Zack Snyder fan though. It's not as good as "Watchmen" but it's still good. He's got a discernible style. It was confusing as shit at times... but the payoff was good for me.
Juicing, working out, eating right, & resting has been my MO. Trying to clean this house & get it ready for my absence. Ready for the fast lane next week.
Posted by Clay Cook at 00:31

Earlier this evening I was led into a line of questioning through Tumblr that rattled me. The questions were about the details of my divorce. I didn't see it coming. There are things that I haven't mentally dealt with regarding that time of my life.
"Congratulations" to whoever it was. They let me know that their goal was to ruin my night. At the rate that my brain is moving, he may have ruined my week.
I'm going to start being selective about which questions that I answer. I tried to be an open book... but I just got my spine ripped out.
Posted by Clay Cook at 01:55

I have been keeping the Tumblr thing going pretty strong. I have also changed my Faceebook page into a Band page. So instead of being 'friends' with people, they 'like' me. I know that sounds funny but it makes it easier to operate over time.
I've been spending a great deal of time getting my gear ready for the year. My hope is that once I put it together right the first time that it will need very little attention throughout the year. I am incorporating a rig built by Bob Bradshaw at Custom Audio Electronics. I can only explain it by saying that it will be a 'big boy' rig. I will post pictures & explanations once it's completed. I have also been relentlessly doing errands for the past 2 weeks. Again, in hopes that once touring begins, I won't have much on my plate.
Also, Coy's album is very close to completion. We started this thing in late '09. My only excuse is our busy schedule. I have turned down many records over the past 2 years knowing that their completion would be a lot longer than I like. It's really hard to remain motivated to work unless there are deadlines & people waiting on a record. With Coy, we have been very unmotivated at times. However, we're very close. With some luck, he will have a mastered album in his hands before April.
Today I played pedal steel & electric guitar on an album for a duo named "JoyScout." One of the girls in the band is Emily Kate Boyd. She & I have been musical friends for some time now. I also produced her last album a few years ago. This album, produced by Will Robertson, is starting to sound good. I can't wait to hear it.
After that I got a hair cut. It's definitely different than what I'm accustomed to. Since my hair now parts in the middle, I have gained a forehead. Still seems slightly foreign.
I also spent some time at our warehouse to start building my guitar rig. However, on of my specs on a custom road case was not met & we'll have to get it fixed tomorrow so I can continue this weekend. Sooo, I made lemonade with my lemons & spent most of rush hour tightening up some of Coy's mixes.
I'm home now & hopefully falling asleep soon. An equally crazy day tomorrow.
Posted by Clay Cook at 22:55