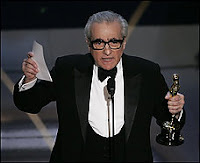 Martin Scorsese wins! I remember distinctly when I walked out of the theater after 'The Departed.' I said, "that was the best film of the year." I had no idea that I would be so prolific. Even if it was his first Oscar, I think that 'Raging Bull,' 'Taxi Driver,' Goodfellas,' & 'Casino' were even better movies. Let's not forget 'The Last Waltz,' which was ahead of it's time in it's scope as a concert video. Sure it moved around between set order & interviews, it still was a great snapshot of rock 'n roll in 1976 (and the cocaine residue in Neil Young's nose).
Cangrats to all... especially a well deserved nod to Forrest Whitaker. He finally did it as well. All that voted for Jennifer Hudson were as guilty as those who voted for The Dixie Chicks in the Grammy's. I never saw the movie, but the clips that I saw on TV clearly pointed out what a average actor she is. The same goes for the Al Gore doc. It was okay. It was not the best documentry out there this year. Oh well... politics infiltrate entertainment every 20-25 years. Nothing we can do about it.
Posted by Clay Cook at 01:03