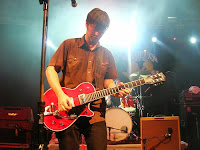 This was a day of days. I started off sprinting to Jonesboro, GA (hour round trip) to drop off my '55 Martin D28 to guitar guru Donald Dunleavy. He's gonna put some juju on it. By the time I got home it was time to leave again. Michelle & I had a full day ahead of us. We saw two new documentaries: 'The September Issue' & 'It Might Get Loud.' Both were very good. My friend Brian Wiltsey joined us for the latter. Somewhere between the two movies I picked up my new-old guitar. After shuffling some gear around, I afforded a 1961 Fender Stratocaster (thanks Sam, Jeff, & Jared). I'm not much of a Strat guy, but this is one hell of a guitar.
After the second movie, Michelle & I had dinner with a friend that we hadn't seen in quite a while. Michelle commented that it was cold outside the last time that we saw each other.
We then came home & let the boys out & fed them. Then it was off to the Son Volt concert at The Variety Playhouse. The sound was terrible. The new line up of Son Volt was ill-fitting as well. Disappointing.
After all of that, I picked up the unapproved master of my new album. I'll have the next few days to listen & make notes if need be. It's kinda like Christmas Eve... I want to listen to it now, but my ears are fried. I'll just have to wait 'til Christmas morning.
Posted by Clay Cook at 23:21