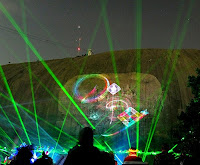 I got in the bed at 7:15am this morning. Before I passed out, I DVR'd "Sunday Morning." When I finally woke up around noon, I realized that Sunday isn't Sunday without that program. It just sets the tone for the whole day, no matter when you finally wake up.
I spent the day at the studio working on some old tunes. I'm thinking of remixing an older record & putting it & a couple others on my site for free downloads. It's going to take some idle time to really pull it off right - but I'm ambitious.
In other news, I'm going on tour with The Wood Brothers in September. The dates are posted on claycook.com. I hope to see some of you out there on the road. I will be opening the shows solo & sitting in with them throughout the night.
Flip Burger was for dinner. The new Cap'n Crunch shake is NOT on my or anyone else's diet... but I had it & it was amazing. Also, went to see the Stone Mountain Laser Show tonight. The last time I saw it was when John Mayer was my roommate in '98. I grew up mere miles away from Stone Mountain Park so I used to see that thing ALL the time as a child. It was cool & different. Some things that needed to stay the same... were the same. Kudos to the people who put that thing on.
Posted by Clay Cook at 23:23